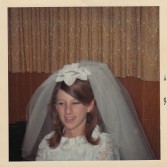 Despite the various and sundry crimes my fiancé perpetrated on unsuspecting friends and strangers, my parents caved in to the pressure by his parents to allow us to get married.  Apparently, being the non-criminal element in the relationship afforded me a certain privilege with my fiancé’s parents. Namely, I got to be the one to save him from ruin, and the sooner I got started, the better. I was only sixteen-years-old.

My fiance’s mother was sort of the alter ego of well-known atheist Madelyn Murray O’Hare; same domineering obnoxious personality, completely opposite view of what happens when one…uh…shall we say…passes on. So, three times a week, during the short respites from burglary and auto-thefts, he insisted we attend a little gathering of believers at the home of “Gifford,” one of his mother’s friends.  There I was taught that only 144,000 of us would make it to heaven. This number included only Caucasians, and only non-Catholic Caucasians at that.  Every Scripture was in secret code too, only to be unraveled by one of the 144,000 non-Catholic Caucasians.  We all assumed that Gifford was the one with the key to the code.  She seemed to think so too.

On the infrequent nights we did not show up for Bible study at Gifford’s, my fiancés mom would get one of his sisters to drive her the fifteen miles to my neighborhood and canvas the streets until she found us in his turquoise 1956 Chevy, pull us over like a highway patrolman, and lecture us on the horrors of hell until we were sufficiently contrite.  Sometimes this took a couple of hours. She claimed to see horrible looking gargoylian demons sitting on our shoulders.  That in itself was enough to drive me running back to the house church, begging for mercy, while the parishioners swayed and shook, jerked and moaned, danced in circles around me, and prayed for my salvation.

I knew my fiance’s mother was calling my parents on the phone and bullying them into allowing us to marry.  I was still surprised they didn’t put up more of a fight.  It didn’t take long for them to sign the consent.  Not only did they consent, they agreed to pay for an over-the-top garden wedding extravaganza and a formal sit-down dinner at an Italian restaurant owned, by all accounts, by a couple of Italian brothers with membership in “the mob.”  I didn’t think of the wedding plans so much a celebration of future bliss as much as my parent’s celebration of getting my future mother-in-law off their backs.

My father’s mother came for a visit at some point in the planning of this gargantuan catastrophe.  I loved her, but she was not my favorite grandma.  I was much closer to my mother’s mother, who was pretty and brought me Dentine gum every time she visited. This other grandma had bird stick legs and a sour expression. I had overheard my parents discussing her “situation” many times. It didn’t sound good. They were constantly having to supplement her income and they weren’t happy about it. It seems grandfather had left her and my dad when he was an impressionable thirteen-year-old, and left for South America to stake his fortune with his brother, who had founded Cost Plus.  My father never saw him again, except for one brief visit after my father almost burned his leg off in a fire.

I was standing in the bathroom trying on my veil, turning my head just so, slight smile on my face.  My grandmother happened by the bathroom on her way through the laundry room to the kitchen.  “Well, if it isn’t the Queen of Sheba!” she squawked.  She had never spoken to me like that before.  Shock and hurt coursed through my body in quick succession.  My mind searched for an explanation for her hostility and came up with one that made sense to me. My mother must have told my grandmother I had been mean to her, and my grandmother believed her. But I truly believed that my mom loved my brother and sister and alcohol more than she loved me. I thought everyone saw this as I did and felt sorry for me. Even so, I had been trying to hold on to the slim chance that it might not really be true.

I had always loved all my relatives unconditionally, assuming they felt the same way about me, and I wasn’t prepared to let go of that view in such a quick flash. I thought my mother’s alcohol-fueled diatribes would appear so nonsensical to my grandma that she would empathize with me and feel a sense of concern and obligation to make sure I was all right. At least Ron’s mother cared about my eternal salvation and tried to keep my feet out of hell fire.

I thought grandmothers had to like you. It’s a law or something.
― Mary E. Pearson, The Adoration of Jenna Fox

The wedding took place on the last Saturday of December 1967, a year and a half before I would have graduated from high school.  I had gotten kicked out earlier that year, so I didn’t have any homework that weekend anyway. Although it was right after Christmas, the Los Angeles weather could not have been more perfect for an outdoor garden wedding. I walked down a curving white staircase on the arm of my father and out into a garden surrounded with ivy covered walls. The guests turned towards me as they stood together, quieting their murmurings about the absence of my mother. She showed up later at the reception, full of vim and vigor and a good portion of a fifth of vodka. She staggered around the tables, greeting guests in her yellow and cream brocade sheath dress with matching coat and pill box hat, laying it on thick about having had diarrhea while trying to stabilize herself with backs of chairs. I was horrified, and yet felt strangely justified. Only later would I feel a sense of shame and regret so deep it made my chest hurt. All those shoulda, coulda, woulda’s clanging around in my head.

One night several years ago I had a dream.  My mom was in heaven with her family singing a song about the holy Word of God.  She, my grandmother, my great-grandmother, and two of my aunts were using sign language to illustrate it as they sang, and somehow I knew they learned it there. One day on the other side of this life my mom and I will talk again, forgiveness and love will flow, and it truly will be unconditional.

6 thoughts on “Here Comes The Bride”